End of an Era

LOS ANGELES, Calif. (August 17, 2012) - In 1987-88, I was commuting from Laguna Beach to Long Beach. I happened to be tuned onto 95.5 KLOS one morning and heard a Southern gentleman with this infectious guttural laugh. It drew me in and I started listening to these two guys (Mark and Brian) who seemingly were making it up on the fly in a free format. At the time, they really pushed the FCC boundaries and in fact were suspended on at least one occasion (for an incident involving a woman, a dog and some peanut butter). Throughout my career I have always been a near four hour listener. It's hard to believe that all this time has passed.

Today was the final broadcast of the Mark and Brian Show and it was a very heart wrenching final hour of the show. I'm sure it will really hit me on Monday morning when I get in the car and the show won't be on. Truly the End of an Era...

Way back when, Brian was one of the finalists to become Bozo the Clown, however, it turned out that he didn't get the job. One of the things they used to do was throw birthday parties for each other. For one of Brian's birthday shows, Mark worked it out so that the Bozo the Clown people came down to dress up Brian as Bozo. However, because Mark wasn't sure if he could get Brian to follow along, he got him drunk on tequila first. For years Mark has talked about his favorite photo of Brian dressed as Bozo, drunk in the back of the Mark and Brian mobile and smoking a cigarette. They could never post it because of legal reasons, however, today they did. 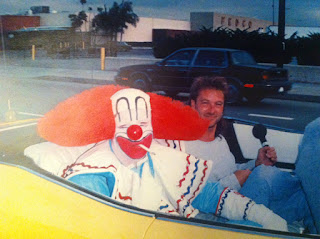 Here's a link to a podcast of the final hour.