In late August, 2009, I took the Rolleiflex to downtown Seattle outside Pike's Street Market. My goal was to capture some stealth street photos. I was trying to be invisible, but the camera drew a huge amount of attention. Most people were amazed that film was still available! I walked to the center of the crowd and sat on the ground to capture this shot of a street performer. Shot on Fuji Acros 100 (pushed to 400) and developed at home with Kodak Xtol. 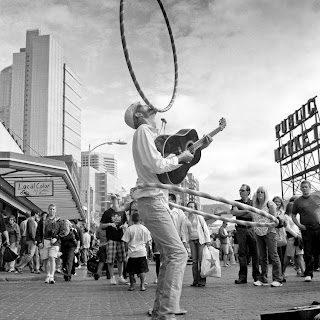