SNOQUALMIE, Washington (November, 2015) - I spent the Thanksgiving Holiday in Washington this year. It was unseasonably cold throughout the trip. Mornings were about 27 degrees and the daytime high was in the low 40's. The area had heavy rain in the weeks before, but we hit a sweet pocket where it only rained one day.

Snoqualmie Falls is a 270 ft. waterfall on the Snoqualmie River between Snoqualmie and Fall City, Washington. Most of the river is diverted into a power plant, but because of the heavy rainfall the water flow was very heavy which created a blinding spray. It was very wet, almost like standing in the rain. If your camera wasn't sealed you might of had issues. In addition, if you didn't have a lens hood your lens element would be wet. When I arrived visibility was just about zero. I heard moans from the other visitors about how you couldn't seen anything and many were leaving. The interesting thing I noticed was even though visibility sucked, the afternoon sun was peaking through the clouds. For many, this made things worse because of the backlit exposure challenges. I setup in a position and after a while started to notice little moments of clarity. Patience was a virtue on this day. 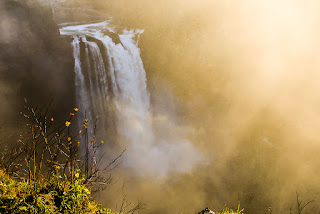 This image of Mount Rainier was captured out of the window of a moving car while driving across a floating bridge. I shot three frames to ensure focus was right. Once I had a chance to look at it, I noticed the bird in the foreground. Amazing how little things happen in milliseconds and could possibly go unnoticed if not for these captured images. 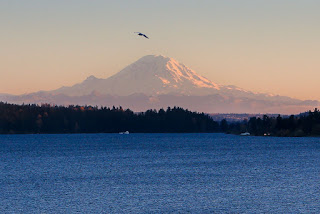 The next image of Mount Si only existed for a short period of time. The mountain was named after a local homesteader Josiah "Uncle Si" Merritt. It was made famous in the show Twin Peaks, which was filmed in North Bend, Washington. From the time I captured it, the clouds continued to drop and completely dissipated within 10 minutes. Amazing how life's moments can pass you by if you're not paying attention. 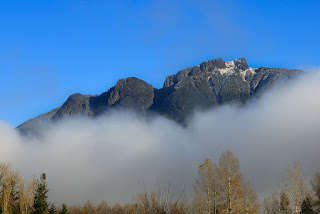