Queen of the South


SEATTLE, WA (August 7, 2016) - I arrive in town just in time for Seafair Weekend at Genesee Park. A fun time of boat races, tailgating on Lake Washington and an airshow. The highlight of the weekend is the U.S. Navy Blue Angels flying over Lake Washington. The only problem is I didn't plan ahead. We decided to head downtown after the airshow had already begun. It's a shocker that there was no place to park! So years ago I remembered finding a neighborhood on the South side of Seattle with a nice view of the city. I didn't remember exactly how to get there, but knew the general area. Without too much trouble we found it. In my mind I thought I had an original idea. As it turns out, about 100 people had the exact same idea. Keep in mind, the airshow was happening on the other side of the city. I was just kind of hoping to get a glimpse of the Blue Angels flying over the lake. As everyone stood around talking, without a sound, the Blue Angels came banking around the city from left to right. I swung my camera up and laid on the shutter. I would say about 95%+ of the people missed it. It was that quick. Anyway, here's the image I captured. Thanks for looking. 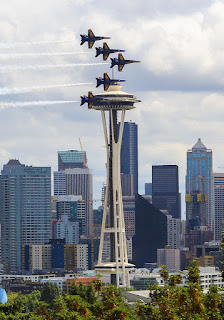